Cancer is a group of more than 100 different diseases that are characterized by uncontrolled cellular growth, local tissue invasion, and distant metastases. Women’s reproductive cancers are the cancers that originate in female reproductive system which include cancer of the cervix, ovaries, vagina, vulva. Cervical cancer is a cancer related death throughout the world, especially in developing countries. Cervical cancer has been the commonest cancer among women in India, over the past two decades.

With an estimated 570,000 cases and 311,000 deaths in 2018 worldwide, this disease ranks as the fourth most frequently diagnosed cancer and the fourth leading cause of cancer death in women (Fig.1). Cervical cancer ranks second in incidence and mortality after breast cancer in lower Human Development Index settings (Fig. 2). Fig.1: The area of the pie chart reflects the proportion of the total number of cases or deaths; nonmelanoma skin cancers are included in the “other” category. Source: GLOBOCAN 2018. Figure 4: Anatomical changes in cervix from normal to cervical cancer.

The first intercourse at an early age increases the risk of having the cancer to a greater extent.

A higher number of sexual partners increases the risk of cervical cancer.

A woman who has taken birth control pills for a long time may have a higher risk.

Women who had their first full-term pregnancy when they were younger than 17 are at higher risk.

A woman who has had 3 or more full-term pregnancies may be at greater risk.

A woman who smokes has a higher chance of getting cervical cancer.

Women who have a mother or sister with cervical cancer are at higher risk for it.

Many women with low incomes don’t have access to good health hygiene. This may prevent regular screenings and increase their risk of cervical cancer.

A diet low in fruits and vegetables may increase the risk for cervical cancer. 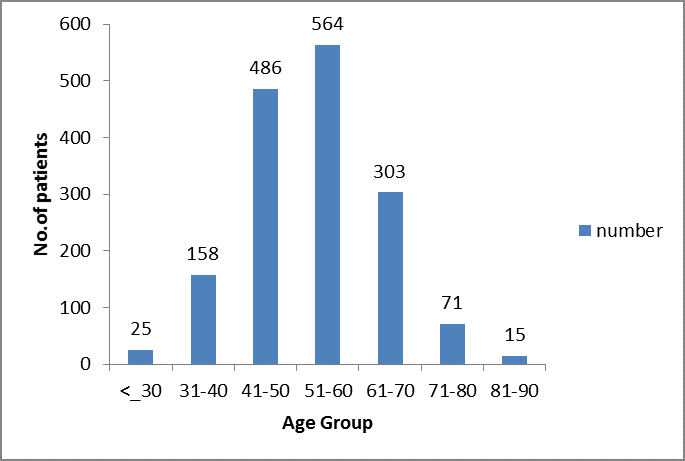 The average age of women when they are diagnosed with cervical cancer is the mid 50s; however the precancerous changes get diagnosed in their 20s and 30s.It peaks up in the age of 51-60 years and then eventually decline with the increase in age. This difference in the age at which precancerous changes are most frequently diagnosed and the age at which cancer is diagnosed highlights the slow progression of this disease and the reason why it can be prevented if adequate steps are taken. 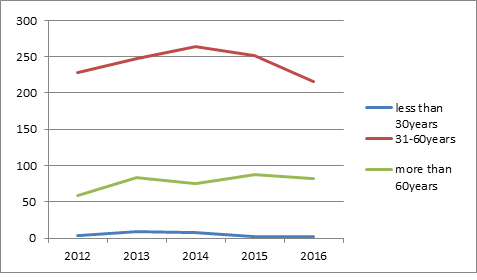 The pie chart depicts that most of the patients had the Hypertension(HTN) and DM. It is the Smoke and alcohol consuming patients who are more prone to develop cancer. 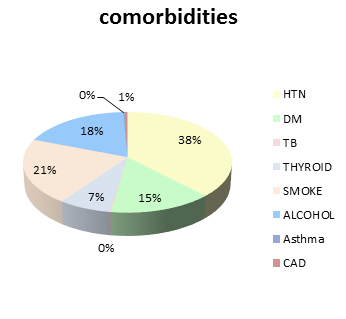 There are some early symptoms that include :

One or more of the following methods can be used for screening and detecting the cervical cancer:

In this acetic acid (3%-5%) is applied to the cervix and the cervix is then visually examined sometimes with a flash of light. If aceto-white lesions are noticed, the patient is offered with immediate treatment with cryotherapy. VIA has a sensitivity of 77% and specificity of 86%.

The type of the treatment the patient must undergo depends upon the stage of the cancer, hence staging is very important and plays a crucial role in the treatment.

Staging of cancer is based on the following characteristics:

Cervical cancer is staged from stage 0 (least severe) to stage IV (metastatic disease, the most severe).

FIGO staging of cancer of the cervix uteri (2018). Figure 9: Year-wise stratification of cancer stage at the time of diagnosis (RGCIRC: 2012-2016)

The graph shows an increasing pattern for late stage diagnosis. The higher the stage the worse is the prognosis.

Histopathology refers to the microscopic study of tissue especially of the abnormal tissue as a result of disease.here are different histologic types as follows:

Squamous Cell Carcinoma is the most frequent type of cervical carcinoma followed by adenocarcinoma. The rarest forms of the carcinomas are the adenoid cystic carcinoma, adenoid basal carcinoma and small cell carcinoma.

Histopathologic grades are as follows: Surgery, Chemotherapy and Radiotherapy are the three main modalities which may cure or manage cancer.

Surgery is the removal of the tumor and some surrounding healthy tissue during an operation. A gynecologic oncologist is a doctor who specializes in treating gynecologic cancer using surgery. For cervical cancer that has not spread beyond the cervix, these procedures are often used:

For cervical cancer that has spread beyond the cervix, this procedure may be used:

The advantages of surgical treatment are:

(1) It is feasible to determine the postoperative stage precisely on the basis of histopathologic findings, thereby enabling individualization of postoperative treatment for each patient;

(2) It is possible to treat cancers that are likely to be resistant to radiotherapy; and

(3) It is possible to conserve ovarian function.

Radiation therapy is the use of high-energy x-rays or other particles to destroy cancer cells. Radiation therapy may be given alone, before surgery, or instead of surgery to shrink the tumor. Many women may be treated with a combination of radiation therapy and chemotherapy.

Side effects from radiation therapy may include fatigue, mild skin reactions, upset stomach, and loose bowel movements.Most side effects usually go away soon after treatment is finished. After radiation therapy, the vaginal area may lose elasticity, so some women may also want to use a vaginal dilator, which is a plastic or rubber cylinder that is inserted into the vagina to prevent narrowing. Women who have received external-beam radiation therapy will lose the ability to become pregnant, and unless the ovaries have been surgically moved out of the pelvis, premenopausal women will enter menopause.

Sometimes, doctors advise their patients not to have sexual intercourse during radiation therapy. Women may resume normal sexual activity within a few weeks after treatment.

Chemotherapy is the use of drugs to destroy cancer cells, usually by ending the cancer cells ability to grow and divide. Systemic chemotherapy gets into the bloodstream to reach cancer cells throughout the body. Common ways to give chemotherapy include an intravenous (IV) tube placed into a vein using a needle or in a pill or capsule that is swallowed (orally). A chemotherapy schedule, usually consists of a specific number of cycles given over a set period of time. A patient may receive 1 drug at a time or combinations of different drugs given at the same time. For early stages of cervical cancer, a combination of radiation therapy and low-dose chemotherapy is often used. The goal of chemotherapy when given with radiation therapy is to increase the effectiveness of the radiation treatment. This combination is given to control the cancer in the pelvis with the intent to cure without surgery. It may also be given to destroy microscopic cancer that might remain after surgery. Chemotherapy may be used in higher doses to treat cervical cancer that has come back, called recurrent cancer, or for those patients whose cancer has spread beyond the pelvis, called metastatic disease.

The side effects of chemotherapy depend on the woman and the dose used, but they can include fatigue, risk of infection, nausea and vomiting, hair loss, loss of appetite, and diarrhea. These side effects usually go away after treatment is finished. Routine follow-up visits are recommended every 3–4 months for the first 2–3 years, then 6-monthly until 5 years, and then annually for life. At each visit, history taking and clinical examination are carried out to detect treatment complications and psychosexual morbidity, as well as assess for recurrent disease.

If the cancer does return after the original treatment, it is called recurrent cancer. Recurrent cancer may come back in the same place (called a local recurrence), nearby (regional recurrence), or in another place (distant recurrence). Most recurrences are seen within 3 years and the prognosis is poor, as most patients die from progressive disease.The treatment plan depends on the patient’s performance status, site and extent of recurrence and/or metastases, and prior treatment received. Often the treatment plan will include surgery, chemotherapy, and radiation therapy, but they may be used in a different combination or given at a different pace.

The two major approaches for control of cervical cancer involve: (1) prevention of invasive cancer by HPV vaccination; and (2) screening for precancerous lesions.

Two prophylactic HPV vaccines (Gardasil and Cervarix) are currently available in many countries for use in females from the age of 9 years to 26 or before the sexual exposure for the prevention of premalignant lesions and cancers affecting the cervix, vulva, vagina, caused by high-risk HPV types:

Generally a two-dose schedule (0.5 mL at 0 and 5–13 months) is recommended. If the second vaccine dose is administered earlier than 5 months after the first dose, a third dose is recommended. For those aged 15 years and above, and for immunocompromised patients irrespective of age, the recommendation is for three doses (0.5 mL at 0, 1, 6 months).

Even with the advent of effective vaccines, screening will remain a priority for cervical cancer prevention for several decades. Cervical cancer screening has been successful in preventing cancer by detection and treatment of precursor lesions, namely, high-grade cervical intraepithelial neoplasia (CIN 2 and 3) and adenocarcinoma in-situ (AIS). There are various screening methods like the HPV DNAtest, VIA (Visual Inspection with acetic acid), PAP smear test and colposcopy.

A judicious combination of HPV vaccination and screening has enormous potential to eliminate cervical cancer in the foreseeable future. How treatable is cervical cancer?

Cervical cancer is often curable. It’s probably one of the more curable cancers when found at early stage.

Are the results of cervical screening reliable?

Statistics show that cervical screening is 80–90% reliable and can prevent 60–80% of cervical cancers. This means that seven out of every 10 cases of women who would have developed cancer of the cervix can be prevented.

HPV is the most common sexually transmitted infection (STI). There are 100 different types of HPV however only some types can cause health problems including genital warts and cancers.

How long does HPV take to cause cancer?

Researchers believe that it can take between 10 and 30 years from the time of an initial HPV infection until a tumor forms. However, even when severely abnormal cells are seen on the cervix (a condition called cervical intraepithelial neoplasia 3, or CIN3), these do not always lead to cancer

Can you get rid of HPV once you have it?

There is no cure for the HPV virus. Testing positive for HPV does not automatically mean you will get cancer. Some studies estimate that 50 percent of those infected with HPV will clear the virus within eight months— and 90 percent will be cured within two years. It’s only when your immune system isn’t able to fight off the infection that some strains of HPV can persist and possibly lead to cancer. However there are certain things that can be done like quiting smoking and avoiding oral contraceptives can help your body clear the virus, and lower your chances of it persisting and turning into cancer.

Are patients who are treated for cervical cancer still able to have children after treatment?

There’s a possibility for a patient to have children after being treated, but it depends on how early the cancer is detected. The earlier the cancer is found, the better the chance you may have to preserve your fertility.

The surgeries can be performed in a manner that do not require removal of the uterus, but  just the cervix along with the cancer. We can still preserve the uterus and allow women to still have children.

Is special follow-up required after treatment?